There is a project that I would like to make happen this year. It has the potential to have a lot of positive impacts relating to conservation of Peruvian Rivers both directly and indirectly. If you haven’t already check out http://www.pozible.com/project/176117 there are only 16 days left to raise the funds needed, we are 25% of the way there. Pledges are only processed if we reach the full target, otherwise the money stays in your account.

First few days in Chile have been interesting. Looking for vehicles, seeing the sights and gong to street festivals all while super tired from a massive 14 hour time difference. 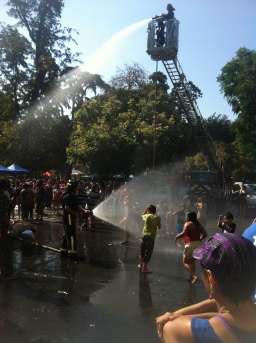 The highlight so far has been the Fiesta del Roto. Roto is a classist word referring poor people living in the city, the people took this label and made it their own, something which they are proud of. Kind of like ‘hey- yeah we’re poor, so what?’; this was their festival. In Yungay, a place that is bubbling with culture (essentially what Brunswick is to Melbourne; cool graffiti, a lot of art and heaps of fixies) the chaos an energy of it all was absolutely amazing; something that would not be possible back home; the energy, the chaos and the excitement of it all would be lost in red tape. Dozens of local community groups came together to put on a vibrant street parade. Drum beats, local dancing and local music representing all the different cultures of South America. For a hours they made their way through the streets, I have no idea how they kept going for so long while keeping up such an intense energy.

It was at the market where a couple of blokes almost made off with my new phone; had it not been for my ninja like reflexes. Walking through the market with Nick and Coni, we decided it was time to get some food. Corn on the cob looked pretty good, so I grabbed one to go. All day I had kept only one thing in my pocket at a time, vigilantly making sure it wasn’t bulging out too much so the ‘gringo’ at the market wouldn’t be a target. After buying the food, and now with my hands full, I didn’t have a chance to put it all back into my bag; I figured it would be safe for a couple of minutes until I finished the corn then I could re-arrange.

I was following the other two through the crowd when a young fellow cut me off and started asking questions right up in my face. Not having a clue what he was saying I replied hastily ‘no entiendo, no entiendo!’ It was at this point when I felt the lousy pocket in my boardys get a bit lighter. It all clicked, this guy was a distraction, while the other was picking my pocket. I made to grab at the person on my right, but it turned out more like a ‘wax off’ upward karate chop. I wasn’t able to grab him, but I did knock my phone out of his hand The guy picking my pocket scampered away into the crowd whilst my phone, knocked out of his gasp, flew over the walkway to land with a crash a few meters away.

Noticing all the commotion behind her, the crowd was watching now; Coni came back and started demanding to know what had happened. The guy that cut me off kept telling her “I did nothing, I did nothing. I was just asking him where he got the corn from.” (Why would a local guy ask a gringo where to find corn in his local market?). The commotion died down and we left, all belongings intact, lessons learned and only a little bit shaken.

After five days of searching I have now found and purchased a van. The transferal process was incredibly frustrating, but we got there in the end. There is no way I would have been able to complete this process without my Chilean friend Coni’s help in translating, arguing through the bureaucracy and help to get around to inspect vehicles. Right now, I am wondering why I always have to do things the hard way. I really hope I get to do some paddling soon then it will all feel ok. I am fairly worried about the van I bought, and whether it will survive the journey (or even be able to make it up the hills). I had to spend a bit more than I wanted to, as used cars over here are much more expensive than at home. When searching for cars, i thought it would be amusing to get the smallest possible van (it’s really small! and will look hilarious with boats on the roof), with only 1000cc’s of raw Suzuki power; however now I am wondering whether this was such a good idea… It is disappointing to say, but I do not think I will be paint the Van; it was so expensive that I will need to worry about resale value when it gets back to Santiago.

I am very keen to get out of the city. Despite being right next to the Andes, it is rare that I can get a view. The smog in Santiago has been quite bad since I arrived. I cannot wait to get out into the open air and see some more of Chile. The plan from here is to get a few bits together in the next few days; service the Van (which badly needs a name!) and then head South to Pucon. From the sound of it I have missed most of the creeking season, but I am hopeful that I will find some people to travel with and then head to Futaleufu. Once I have had enough of the Fu; explore Patagonia and then up to Peru in May.