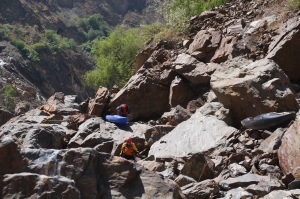 A challenging section where the shuttle is almost as long and dangerous as paddling itself.

It was a spectacular morning when we set off from the riverside hot springs at Curuhuasi. Having stocked up on a stout breakfast of eggs, rice and potato we were ready for the big day ahead. Thousands of tiny hummingbird sized birds whizzed around above the river, snapping up the horrible mosquito/flies which terrorized us every morning and evening, making us bleed in an instant and itch for weeks if we let our guard down. A few hours of class III-IV warm up before we found ourselves between the committing walls of the canyon, staring down a gauntlet of endless sieves and siphons.

Paddling with Julio and Sandra, I was feeling a little bit out of my league, these guys are world class paddlers. Julio, grew up just upstream of here, the Apurimac literally in his backyard, he has paddled this section 7 or 8 times, probably more than anyone else; Sandra competed in the Whitewater Grand Prix earlier in the year and has been paddling professionally for a while. A bit nervous, I mucked up an easy line near the start, copping an awkwardly placed rock to the stomach as payment; it took the wind out of me for a couple of minutes but the lesson was clear- this is serious paddling, get your shit together. Scouting the rapids, it soon became apparent that the river was lower, and very different to any other times Julio had paddled it. Siphons that were normally covered by 2m of water were now exposed; many of the lines he normally would have run were rendered un-runnable. Day one became an epic portage fest; we kept moving fast, making decisions quickly but carrying loaded creek boats over rocks is hard work.

It was at the end of the first portage when Julio asked “have you seen the body?”. Where the rocky ledge finished, forcing us back onto the river, I was shocked to see a decomposing corpse wedged in amonst the rocks. Someone must have fallen into the river upstream, and this became their final resting place. It only could have been there for a few months, since the water level dropped down. Julio checked for identification, but there did not appear to be anything, even clothes must have rotted or been washed away. Deep inside the canyon, we were at a point where there was no option but to continue moving downstream; we were forced to get back into our boats near the corpse; the fetid stench was overpowering. Soon we were back on the river with fresh air, but the gory image was burned into my mind, and would not seem to leave; not perfect when you are trying to focus everything on safely paddling the river.

After numerous portages, totally exhausted, we arrived at the bridge at dusk stoked to have made it to our target. Day 2 started early, body complaining loudly from the previous days boat hauling; unfortunately today was not going to deliver the respite i’d hoped for. The idea was to start hiking early, so we would make a good distance before the sun hit us on the way up to the ruins of Choquequirao. We had our work cut out, most tourists would take a full day just hike up from the river; we planned to go up, explore and get back down in one day. Elevation gain of 1800m over about 12km, we made it up in 5 hours, explored for a couple of hours then headed back down. It was nice being the only ones there early in the day, having the whole site to ourselves. I am incredibly grateful to the woman selling plates rice, eggs and potato chips near the top; a meal which was massively appreciated, somehow I don’t think our two minute noodles back at camp would have satisfied my hunger to the same degree.

Nicer parts of the river

Day 3 we got straight into some bouncy class IV, and cruised throughout the day. Only having to make one portage, the day had a much more relaxed feel. Realising we were ahead of schedule with time up our sleeves, it was nice to spend some time relaxing by the river. Day 4 had a few rapids then a flat paddle out. We got to the bridge around mid-day, and settled in for some fish soup at the tiny roadside restaurant. Expecting a long wait before being able to find a ride back towards Cusco (others had reportedly waited here for days before getting a ride) we got lucky. After watching Braveheart in Spanish only 1.5 times in the small grass roofed dining room, a truck arrived and we were able to jump in the back; a little uncomfortable, but stoked to be on our way..

Discomfort soon turned amazement as we climbed up towards the ~5000m passes through the Andes. Happily riding in the back of the ute, with a perfect view of the mountains, valley and snow capped peaks unfolding in the twilight. Amazement soon transformed into major discomfort as the sun dipped below the horizon, and somehow we kept climbing higher; wind rushing around us in the back of ute, we were shivering in the cold. Having packed as light as possible for a river trip at the bottom of the valley, we were not prepared for these temperatures at all. We climbed down the other side of the mountains, and jumped off 5 hours after starting, the truck was going a different way to where we needed to go.

Getting back to Cusco

Nigh-time, high in the mountains, we stood around shivering and wondering what to do next. No food, no tent, not enough warm clothes. It was unlikely we would find another ride at this time of night. There was a house right near the turn off, and the kids living there kindly invited us in, cooked us pasta with a giant hunk of Peruvian cheese and gave us a place to sleep. Even though they didn’t have much, they were super kind to share it with us; i think we would have froze if they weren’t so kind, especially when it rained in the middle of the night.

Next day we hitched a ride nice and early on the back of a truck full of bricks and construction gear. Much better prepared today, I was ready for the cold, armed with my sleeping bag to roll out on the back of the truck. It was a very pleasant journey. A couple of hours later, we arrived at a town where we needed to find another ride. Luckily another truck was headed our way, all was going well, until it started pelting with rain. We made a dash to the front of the tray and dove under the dirty tarpaulin to shelter from the wind and rain. I was hunkered down under there, almost asleep when the tarp was flung open, a police officer looking down on me. This must be one of the many narcotics check points of the region Julio had described. The officer asked me where I was from, then apologised for disturbing me and replaced the tarp, that was much easier than expected. A few more truck rides, hours in taxis and we made it back to Cusco safe and sound. 3 days to paddle the river, 1 day hiking and at least two dsays to drive back.

Looking down on the river from Choquequirao 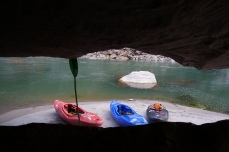 Riding back to Cusco

Looking down to Choquequirao

Looking down on the river from Choquequirao