It was a bittersweet day, internally it was conflicting and difficult to make sense of.

Wednesday of two weeks ago, the Remando Juntos team made their first public appearance in front of 800 people at the Kuyapunakuy festival. Alonso made a great speech, we showed off a short video from our advance expedition in March, we spoke with a lot of people and made many new friends. At the end of the festival they screened DamNation, a powerful documentary combining activism with an anti-dam/ dam removal movement, a perfect introduction to what we are doing. After an enormous amount of time and energy put towards this project; it’s crazy to think where a year and a half has gone to get here- learning a language, finding friends,  building the team, creating partnerships and finding resources. I don’t think I would have surprised anyone if I had been ecstatic to finally see a tangible, meaningful product from it all. 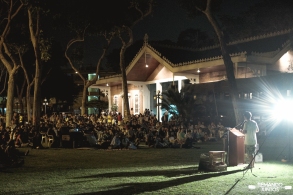 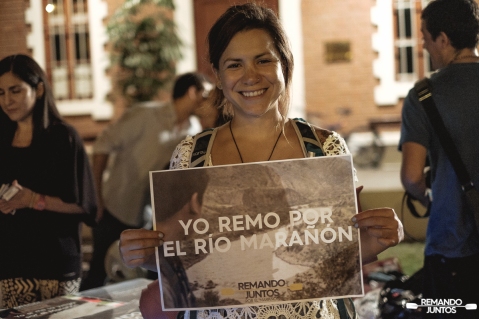 It was hard to enjoy the evening though, in reality it was hard to feel anything at all. Just before the event we had received word that there had been an accident at Tierra Langla. Tierra Langla is the place I call home near Lima. It is a quiet, riverside community. A small group of locals and travellers that make up a family; coming and going as life sees fit, always greeted with a smile and a hug. When you are there, you cook, eat and play music together; everyone tends to the garden which provides a major part of each meal. Generally you just live happy; it is simple, relaxed, healthy and fulfilling. When we heard that Isabela had lost her life in the river that morning, at first it didn’t seem real. Moments passed when we simply couldn’t acknowledge this. It didn’t make sense.
We were told that everyone had been preparing breakfast together when Bela went to the river to bathe. This is a normal part of the daily routine; why use the shower when the sun is shining and there is a beautiful river flowing past endlessly? Everyone was waiting for her to come back before starting breakfast; but she never did. Just some clothes left beside the river. People searched, her body was soon found downstream. The river was high; it is possible that she slipped or was sucked out into the strong current.

It was hard to make anything of the evening. On one hand my team was doing so well, they were celebrating the River, getting people excited and involved in conservation and protection of Rio Marañon; but on the other hand, the River had just taken so much. Conflicted and numb is the only way to describe how I felt.

On the friday Isabela’s sisters and mother arrived to Tierra Langla, from Brazil. It was an intimate ceremony; different from any other I am likely to experience. In the small cemetery overlooking the river; among a mixture of Buddhist chanting, christian prayers and songs sung by all with accompaniment of guitar and violin, we said goodbye. Distinct to the normal ritual in this area, we buried Bela in the ground to be returned to the earth she loved so much. Under candlelight, as the bright moon rose, we carefully piled the earth & stones over the small, white coffin.

On Saturday, all of the family remained together. Where Friday was a sombre farewell, Saturday was a beautiful celebration of life, memories, healing and happiness. A day and feeling I will never have the skill to put into words.

For me, this was a reminder of the power of the river; and that death is simply a part of life. A reminder that we are so small compared to the forces of nature. I found my peace with the river again, my balance. There is no ill feeling, no fear, it is what it is. The river brings life, and so it takes it.

Bela, it was a pleasure sharing time with you; cooking, learning guitar, eating, swimming and meditating. I enjoyed our mixed up conversations in  Portuguese-Spanish-English, and the music you played while we picked grapes and worked in the garden. My heart goes out to your closest family who have a gap in their lives I cannot imagine. I am sad I never got to make those meringue-chocolate-avocado-strawberry deserts for you again that were concocted in November; it started off as a majorly failed pavlova (who knew cooking in a woodfire oven could be so tricky…), but they turned out far more delicious than we could have imagined. On the Sunday afternoon I saw you for the last time, you asked me what their name was, and when I was going to make them again. I’m not sure when I will make them again, but when I do we will call them Belas.