It isn’t even happening under the table. It would almost be better if it was, then at least you could ‘expose’ something.

Oderbrecht, the Brazilian construction giant behind several of the dams on the Maranon, has links to money laundering and bribery through the Panama papers. Some of this money appears to make its way into Peru; while the director of the company is behind bars, sentenced to 19 years for his actions in Brazil’s Petrobras scandal. What kind of government continues to support a company that is targeting their own citizens?

Who do you go to when these construction companies are openly flouting the law and human rights with government sanction; or even worse, government collusion?

This video from 29th April, 2016 depicts a ‘public audience’ hearing for the Environmental Approvals of the Rio Grande dams. Legally, the company is required to show this to local citizens and gain some approval or agreement for what is presented before they can proceed. As shown in the video, certain people are admitted to the audience, and others are not. Oderbrecht company employees choose who can enter, and their will is backed up by the central police force who are on Oderbrecht payroll.

In essence, the most severely affected, the thousands of people who will be flooded out of the valley and have their entire livelihoods lost, cannot gain admission to these meetings in order to voice their disapproval or concerns, or even learn about what is really happening or how they might be reimbursed. This is not a new issue. It has been going on since 2011 when Peru’s former President declared that construction of 20 dams on the Source of the Amazon was in ‘National Interest’.. To fight this, local police officers known as Rondas Campesinas have been arresting Oderbrecht Engineers when they trespass on community territory. The engineers do not have community permission to enter the proposed dam site by local landowners, so as a result the Rondas Campesinas detain the workers overnight, the community decides that the workers should be escorted off community land, then released after requiring the engineers to sign a document saying they will not return. I witnessed this process in the village of Tupén in 2014. Without legal or government procedural recourse, local landowners and conservations have doubled down on what they can control – their land. By denying engineers access to the land, the engineers cannot gather data – no data means no way to complete the studies. No studies, no dam. Moreover it has worked so far, with this action stalling the 700MW, 175m high Chadin II dam which is on hold at least until 2018 due to local resistance. A significant victory for the villages of Tupén and Mendán who would be flooded out if it goes ahead.

This was all fine (well not really fine, but at least the people were able to defend their own human rights), until the company started prosecuting the Rondas Campesinas for ‘kidnapping’ its staff. Many members of the local police now face up to 30 years in jail or enormous fines and are subjected to countless epic journeys from the remote valleys up to courtrooms. These are hearings in which the company lawyers often do not show so that they can stretch out the case as long as is legally possible; wasting weeks of the local people’s time where they would otherwise be working in their farms to support families. Cesar Chavez of Tupén Grande is facing such charges – ‘luckily’ the charge of 35 years in prison was reduced to only a $10 000 fine; something which is completely unobtainable for a peasant farmer and volunteer patrolman.

A couple of weeks ago a colleague from an NGO in Lima wrote to me:

I write to tell you that today the President of the Rondas Campesinas Celendin (the Local Police Force), Eduar Rhodes Rojas, was arrested and transferred to Cajamarca city without further explanation.

After a few calls to organizations and people with whom we work in the region we have found out the reason for this… In short, Rhodes has been arrested – without the proper notification process, as I understand it – in a case that was pending for ‘Aggravated Kidnapping’. It happens that in 2013, the patrols intercepted thieves who had robbed a van. After arresting the thieves, they were detained as part of the procedure followed by Rondera justice. The thieves later pressed charges against the local police force for kidnapping.¹

Therefore you may wonder why it is that we are concerned about this case if it is not directly linked to environmental issues or resistance to projects in the region.

Anyway, I am writing because I think it is necessary to be alert to what is happening in these areas and because I believe that considering the political situation in the country, neither of the two candidates for President will help this situation, but it continues to complicate the work done by officers, grassroots organizations and NGOs.

Please help us to find allies for projects involving the legal defense of the Rondas Campesinas and leaders in the area.

This occurs because there are two separate, and increasingly opposing ‘police’ systems in Peru. One run by a centralised government and military, the other run by volunteers, democratically elected by the community in places that often do not have access to ‘normal’ police forces. The latter is more often associated with implementing the will of the people and is one of the largest obstructions in the way of the corruption that plagues Latin America. The Rondas Campesinas often avoid conflict by presenting issues before the community. Read more about Ronda Law here. 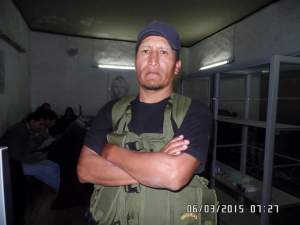 Eduar Rhodes Rojas, leader of the Rondas Campesinas of Celendin.

So now Peru has a situation where not only is Oderbrecht completely undermining the authority of the local police, but has paved the way for regular thieves (likely with support of the company) to press charges against the police. It is a ludicrous situation, and if not checked soon will completely undermine the people’s ability to protect their own rights. What avenue is left to them? They are doing the only thing they can, after having been excluded from the normal processes.

The last 6 months I have been working to develop the Marañón Waterkeeper platform; we will form a part of the puzzle that can help to address these issues. By bringing international support and funding to local lawyers and experts, we can stop this before the entire system is undermined; before the Ronderos lose all authority and the way is paved for corrupt companies, police forces and political powers to steamroll local people and pristine environments in the name of misguided ‘progress’.

We need to find the funding and experts who are able to overcome this in a court of law and stop this ridiculous precedent going any further. It will not do simply to represent the local people in their individual cases, for this is exactly what Oderbrecht wants. For local people and NGO’s to squander their funds in pointless court cases. We need to make a bigger solution.

It is taking longer than I had hoped to get everything up and running for the Marañón Waterkeeper, but within the next month we should be able to launch a website with more detail about how we plan address to these issues. I was hoping to release this post as one of the first articles on that site, but it cannot wait. If anyone wants to lend a hand with graphic design, finding & applying for relevant grants & foundations or even managing a website these things will speed up the development of an organisation that is being started on a minuscule (almost non-existent) budget.

For now, please like the Marañón Waterkeeper Facebook page so that when we do launch the platform you can help us make a bigger splash. You could also follow this blog to receive more important updates as they occur. If you are a part of a media outlet, or have access to one, please help spread the word by reposting this article or contacting me for a version, complete with photographs, suitable for your publication.

For anyone who might like to support us you may now make donations through the Waterkeeper Alliance (make sure this is dedicated to Marañón Waterkeeper).