After my passport & laptop were stolen out of a friend’s car in Bagua, Northern Peru; I was confined to Lima for a couple of months where I was able to borrow a computer to complete work & preparations needed for the arrival of our VIP guest, and go through the epic process of getting a new passport while in Peru (thanks to Julieanne & Luke for epic help battling through bureaucracy to get this done!)

Waterkeeper Alliance president Robert F. Kennedy Jr. (son of US. Senator Robert F Kennedy, nephew of US President John F Kennedy) was to be passing through Lima. He could spend a 1.5 days in there, and my mission on behalf of Marañón Waterkeeper was to use this to our best possible advantage. This meant making meetings at the highest levels and creating media attention.

After drafting, re-drafting, then re-drafting letters & meeting notes it became clear that I was very much out of my league. My pigeon Spanish had served me well (enough) in all encounters up to this point; however I was seriously reaching my limit when drafting letters and writing emails to secretaries of ministers & the president. What do I know about getting a meeting with the head of state in my own country anyways, let alone in Peru?

As the deadline drew nearer, I was getting extremely nervous. “Bobby Kennedy is going to arrive in Lima to represent this issue, and I haven’t have been able to organise a single thing…Epic fail. My short career as a Waterkeeper will be over as quick as it began.” It was at this point that a guardian angel appeared. A friend introduced me to Nina over dinner, with a passion for protecting water & ecosystems she was excited to help. She grew up in Lima, was well connected and knew her way around. We continued trying to get a message through to the president, and to his ministers, but the clock was ticking fast.

In true Latin American style, the day before Bobby landed in Peru, we got through to President Pedro Pablo Kutchinski. He sent his apologies; he would not be able to meet with Mr. Kennedy as he was outside of Lima, however he would send the Minister of Energy & Mining, and the Minister of Environment to meet in his place. 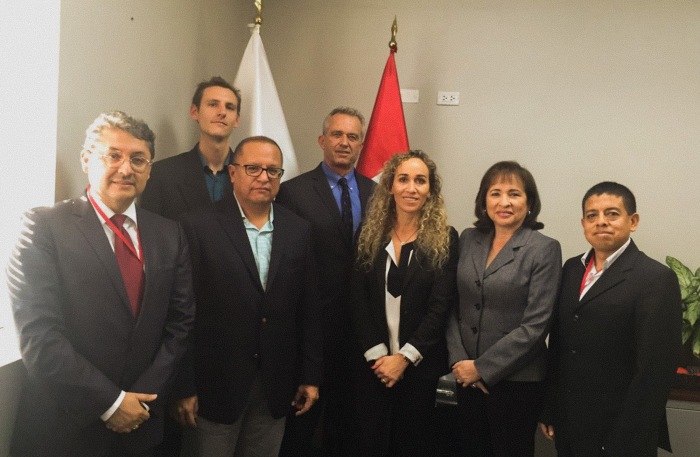 In these situations, I feel very much like Forest Gump in all the random historical moments he appears in, an ignorant/oblivious agent of fate/dumb luck. Completely un-equipped and yet somehow happen to arrive in the right place at the right time to help things go ok. If that’s my role to play, then i’ll do my best. Enormous thanks to Nina and Sergio who both helped enormously to make this happen, and everyone else who played a part (you know who you are)!

The conversation with the ministers was an interesting one, in which I learned a great deal about how the world works… The result of this meeting, and the impending media created by Mr. Kennedy’s visit, was that the Peruvian government declared they would not build dams in the Amazon. (Read Full Account here). This is a huge step forward, and a massive win which we will happily claim (also thanks to a coalition of organisations working to protect the rivers of Peru & world for laying groundwork over the previous years). However, I can’t help but feel it is also just a political maneuver to completely sidestep/avoid the issue. They haven’t cancelled any plans for dams in the jungle, they aren’t stopping any of the feasibility studies in the jungle going ahead (which are already influencing social structures, creating corruption & bribery). They haven’t made a move to protect the jungle sections of the river, just said that they won’t build a dam in their term in government (which wasn’t happen anyway due to an oversupply of energy in Peru and lack of investment). 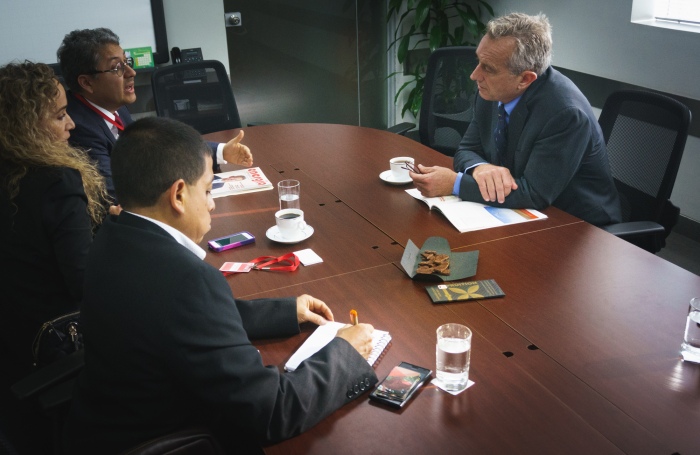 Special thanks to Fruition and Marañón Chocolate for providing some of the most delicious chocolate, handmade with the rarest Cacao in the world, straight from the Marañón Valley. There was definitely a tense moment in the meeting where light refreshment & sweetness was required.

The news was great, don’t get me wrong. It creates risk and uncertainty for investors in large dams and it helps us to plan ahead, knowing we have 5 years, at least. This is time to build the case for the Marañón River, to study it’s ecology more thoroughly, to grow the community to protect the river, and to build up tourism and economic factors which would weigh against the dams. However its a long way off before we should be celebrating, or claiming that the Marañón is protected. 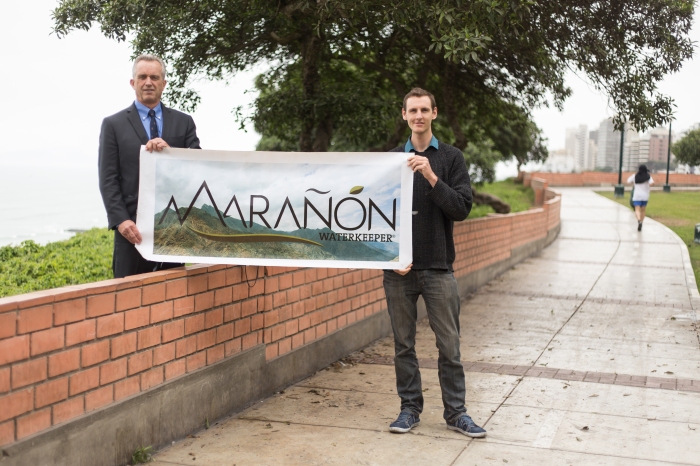 I should have suited up for this… Ah well, next time.

All up, a fairly unique experience. Bobby Kennedy is a pretty interesting guy with a few stories up his sleeve (see translation of article we got into Peruvian newspaper SOMOS). It was fun to chaperone Kennedy and his wife Cheryl Hines around Lima and we even got to pile in for a ride in my friend Camote’s VW beetle. I learned a huge amount through the whole process, from getting the meetings to happen, briefing Mr. Kennedy, through to speaking with the ministers themselves, seeing their perspective on the Marañón and gaining a glimpse into how the wheels turn. 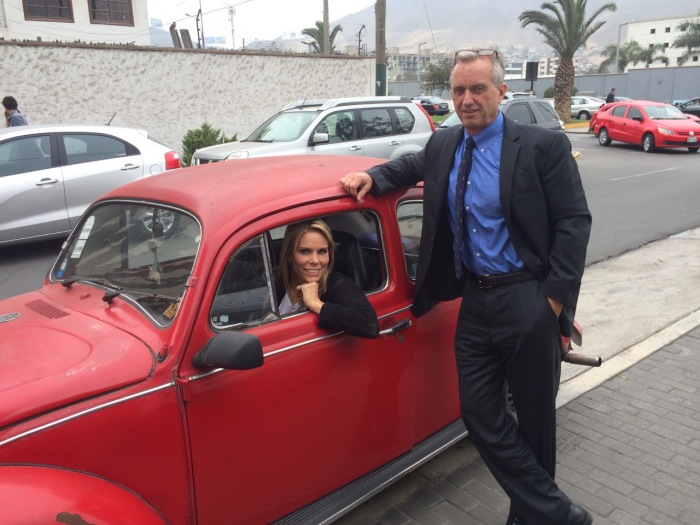 Traveling in style (we hastily gave Camote’s Beetle a quick dusting when we realised Mr. Kennedy and actress Cheryl Hines would be joining us.)

In between all this, we appointed Diana as National Coordinator for the Remando Juntos campaign. She is doing an exceptional job, working to build up the team of volunteers who will grow the campaign over the next year. It’s extraordinarily lucky that Diana is volunteering with us, putting in so much effort, and is bringing more people to the cause, because we don’t have any funds to pay her yet… Fundraising is something that I have not been able to progress this year… Marañón Waterkeeper is still yet to receive its first donation… (Make a donation here? An ongoing regular donation even better :) ! ). With the team growing, I will be able to focus more on fundraising over these coming months, and hopefully in 2017 we can pay Diana and other members of the team (maybe me too!)! What would be perfect is if a fundraising person (Development Director) appeared out of nowhere to help us grow. We would even pay them a salary once they get the funds rolling in…!

Marañón Report – An Overview of Everything

I have been working on this report, which basically summarizes what we know about the Marañón River, its ecological importance, and the status of dam projects. It’s a gateway for people to get to know the issue, then complete additional research if they want. This is still work in progress, so please give a comment if you see any mistakes or gaps or additions. It should help with all the grant applications i’ll write over the coming months…
This report took longer than expected as I was waiting on several pieces of official information to be provided by the government; a formal request was lodged; however after a couple of months with no answer we will put this out soon, and then can update it once more information becomes available. (After our conservation with the ministers its not surprising they haven’t released their report yet… maybe they will use my report to learn more about status of dam projects and then they will release the official version to us…)

Even though two months in Lima without a paddle is a long stretch, there were some opportunities to enjoy it. Several surf sessions each week helped my surfing abilities progress substantially; and I was able to go for some great bike rides (until my bicycle also got stolen…). There are some incredible hikes to do around Lima too; Marcahuasi was easily my favourite; and the ruins at Rupac were also pretty cool. 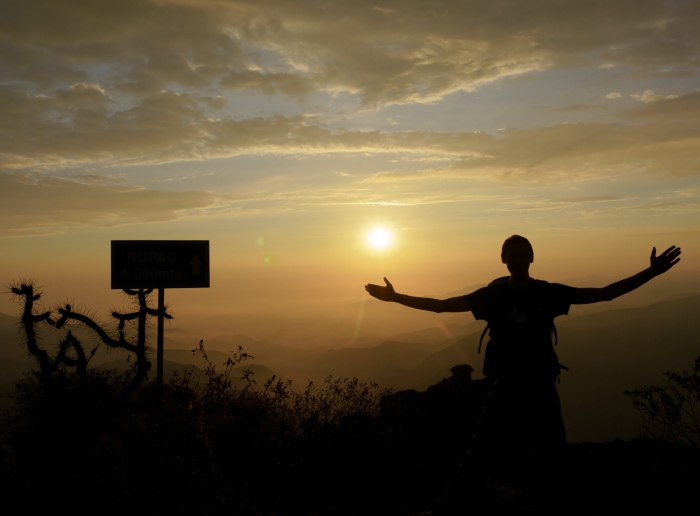 Happy to be moving along, and out of Lima. Next weekend is the Machu Pichu Kayak Fest; we have been paddling daily laps on the Urubamba River while organising the festival; I’m heading up the conservation and awareness side of things,  I just received over 300 posters from local school kids who entered our painting & drawing competition themed around protecting rivers! 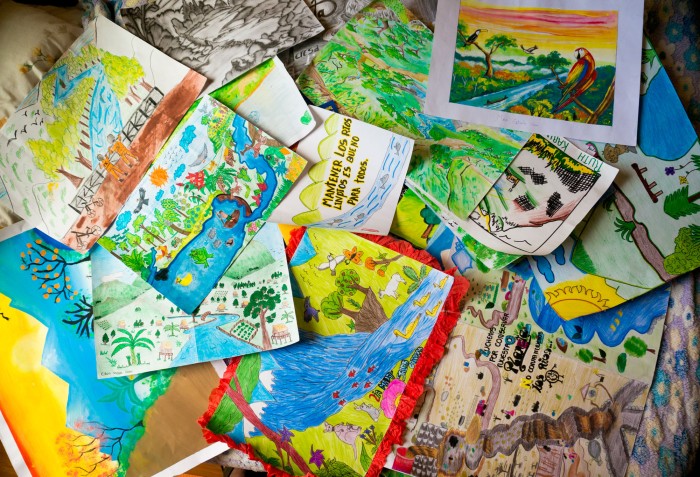 So many individual expressions of river love! How are we going to choose a winner? 300 submissions and counting… I’m pretty sure there are only 300 kids in the town of Santa Teresa! The kids get it… why is it so hard for the people in charge?

In November i’m stoked to be heading up to Canada, to see my first winter in 4 years. I got a ‘real’ (paid) job for the next 4 months as a lifty in Nelson, BC; something that was necessary due to my so far lack of ability to get paid for what i’m doing down here… I feel like this is a sneaky maneuver to stretch out the time I have to make this life work. It will be good to spend some time working with my brother Paul, earn some money, and continue to work on Waterkeeper business in my spare hours. I figure being a lifty out in the mountains all day will be fun enough that when I get home in the evening I will be ready to apply for grants and do what needs to be done… That’s the idea anyways.

I had set out this year thinking, “ok, I have just enough money to get through this year (if i rely heavily on kindness of friends, my international families, couches, spare rooms and generally live like a dirtbag) to make this thing work. Either I make it viable by the end of 2016, or that’s it, maybe I have to get a normal job”. Like most things though, a clear cut answer hasn’t appeared. I haven’t made it viable yet, I still don’t know how it’s going to work, but given our recent success and that the RJ campaign is showing promising signs; I still don’t think i’m done here. It will however be necessary however to make some money, someday, somehow… There’s some cool ideas and prospects floating around, we will see if we can make them happen.

It’s kind of nice for my bank account to be arriving back to zero, I guess I have had a good stretch without what you might call ‘a real job’, almost 3 years all up. It’s nice to arrive at what feels like a new beginning, a blank slate and to feel the pressure that I need to make *something* happen, or else I simply need to give up and go home. 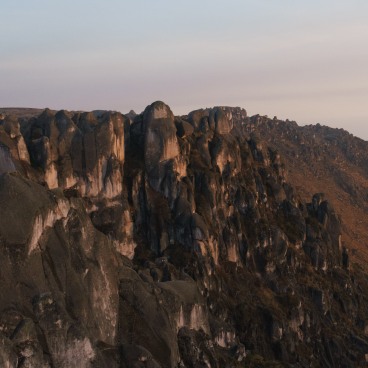 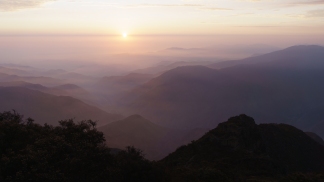 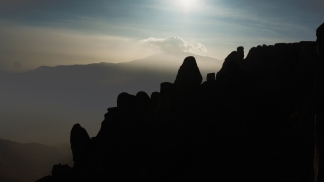 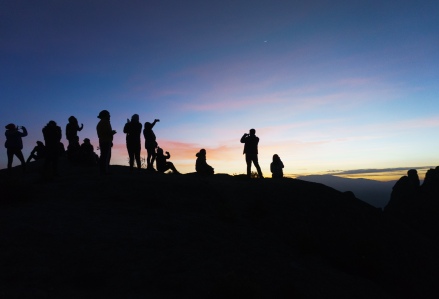 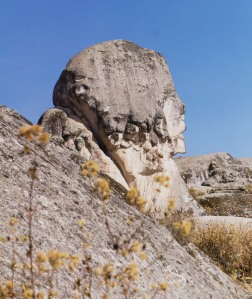