It’s as much of a surprise for me as for anyone else; but I will be back for a visit to Australia next week. Here I was happily ready to get settled for working the next 4 months in Canada, (living in a real house, with real bed and a hot shower!!); when my friend Rok called me up and told me we are going to Tasmania next week, we gotta buy the tickets ASAP.
It’s rare you meet someone who believes with so much conviction in what they are doing; and follows their intuition so fully. I am glad Rok is one of those people.

Sometime in 2017 we’d been planning to get to Tassie to film sections for Rok’s upcoming film, paddle the Franklin and meet a lady named Anka. When Rok called me at the start of November and told me that we needed to get to Tasmania ASAP (for reasons I won’t go into here); it was a surprise to myself that I told him I would go if it was possible. Knowing that I was pretty much broke (finally after the last 2.5 years of self funded Paddling with Purpose et al), I didn’t actually think it would be possible, so no harm in making that promise…

Was nice to catch my Bro Paul, but we’l have to wait a few more weeks to head out again… Looking forward to the next months as part of an incredible community at Whitewater Ski Resort.

Then Rok said he would find the funds. He said believed we needed to get down there. Both of us. I was dubious, and still had my own projects to focus on. Having done a really shitty job at raising funds for Marañón Waterkeeper this year; I was not going to start on a crusade to raise funds for something completely unrelated to that mission; or for what most people would think is some kind of holiday… (it’s not…believe it or not). In my experience, it’s hard enough to raise funds to support a campaign to fund community based actions; let alone tickets to get to the other side of the planet. But Rok persevered anyway.

A few weeks later, I saw the fundraising wasn’t going as well as Rok had hoped. I was a relieved. This meant I could stay in Canada, get settled, earn some money, and stop this trend of getting poorer and poorer hopefully before I reached rock bottom…

That’s when Rok called me and said in his Slovenian accent; “Benny, the fundraising hasn’t gone so well. But were going to Tasmania anyway. I’m taking out a loan. We HAVE TO DO THIS. And we have to buy our tickets this week”.
Really I should have known this might happen… Rok is an ex-olympic athlete, and for this he is both extremely driven, and extremely stubborn. To be the person that starts the BIGGEST river conservation movement in Europe, and grows it beyond all expectations in less than one year, canceling several dam projects in its wake, is an enormous feat. 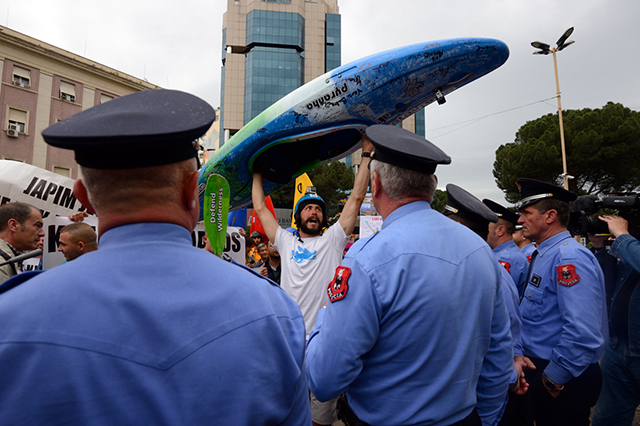 Rok can explain the story better; but in reality it’s much simpler than a film, than a movement. We’re going to meet a lady named Anka. It is as simple as that. I don’t fully understand why yet, I don’t think Rok does either; but for some reason we have to go; so go we will.
Not many people in the world stick to the conviction like that. Not many people follow their intuition to the other side of the planet, and not many take a couple of friends with them; but Rok is a pretty special guy.

While in Tasmania, we will be paddling the Franklin River, with kind support from Water by Nature – Franklin River Rafting. There are spaces available on this luxury rafting journey, dates Dec 11-17, if anyone out there wishes to join us for this very special trip you will be a VIP. If you join us on the river, you will be a guest part of something much bigger (and be involved in the filming of ‘The Undamaged’ documentary, and photos for the campaign). Contact us if interested.

If Rok’s conviction, motivation to make his documentary and crazyness to undergo the journey from Slovenia to Tasmania to meet his hero,  Anka, stirs anything inside of you, please consider donating to this cause. I can assure you that Rok is on his way to making an enormous difference. I’m sure he’s going to make it work one way or another; but it would be great if he doesn’t end in debt after all this is done…You can donate here. The Undmaged will be a great film, but the mastery will come with what Rok does with it. A good film is a tool, and Rok is a master craftsman. Watch the Balkan Rivers Movement grow.

So much for peace, quiet and a few months relaxing in a normal job, normal life for a little while (well more normal ayways…); here I go jumping back onto the crazy rollercoaster that is life.

Special thanks to Killain, all his paddling gear and a car named Poo Bag. Extra-Massive thanks to my new boss for giving me 3 weeks off, before I have even finished my training… I think that a sure sign that we have ended up in a beautiful, human and supportive community. I can’t wait to get back and see out the season with 150% motivation and smiles to make up for this incredible gift. In the meantime, it will be great to see family and friends as I pass through Melbourne next week. See you soon!